Years ago I'd read some blogs where the authors were creating lists of 101 things to do in 1000 days. I thought it was a really cool idea and spent some time making my own list. I've always talked a lot on this blog about the importance to me of goals and that list was a way of documenting goals. I put a decent amount of thought into it and did a fair number of the things on the list before losing steam on it after several months.

(One of the things which I did as part of that list was write some stories. Five of those have been published or are contracted to be published. In fact, the last one of those which was still circulating just sold in the past month or so.)

I took another look at the list recently and saw some things that I'd still like to do. And while I haven't created a new formal list yet, I've been actively marking off some of the things which were on the old list or would be on a new list during the past couple of months.

Something which wasn't on the old list but which sprung to mind when thinking about additions to a list was taking a flying lesson. A college friend of mine had gotten his private pilot's license quite a while back, and I remember finding his blog posts on the subject interesting reading. By coincidence, while I was having lunch with a coworker who I hadn't really spoken with in years it came up that this coworker was working on his own IFR (Instrument Flight Rules) pilot license. (VFR, or Visual Flight Rules, is the initial level of licensure. IFR requires additional training and study.) Since the idea of taking a flight lesson was on the top of my mind, I asked him if there was an instructor he would recommend. He recommended his own instructor, another coworker, and just that quick I had the instructor's contact information and then a lesson scheduled for six PM this evening.

Last night and today I was actively watching the weather, trying to determine if the flight would be able to happen or not. Mid-afternoon I got a message from the instructor that we were a go. But even getting ready to head down, I noticed some pop-up showers on the radar and wondered if the flight might be scrubbed. 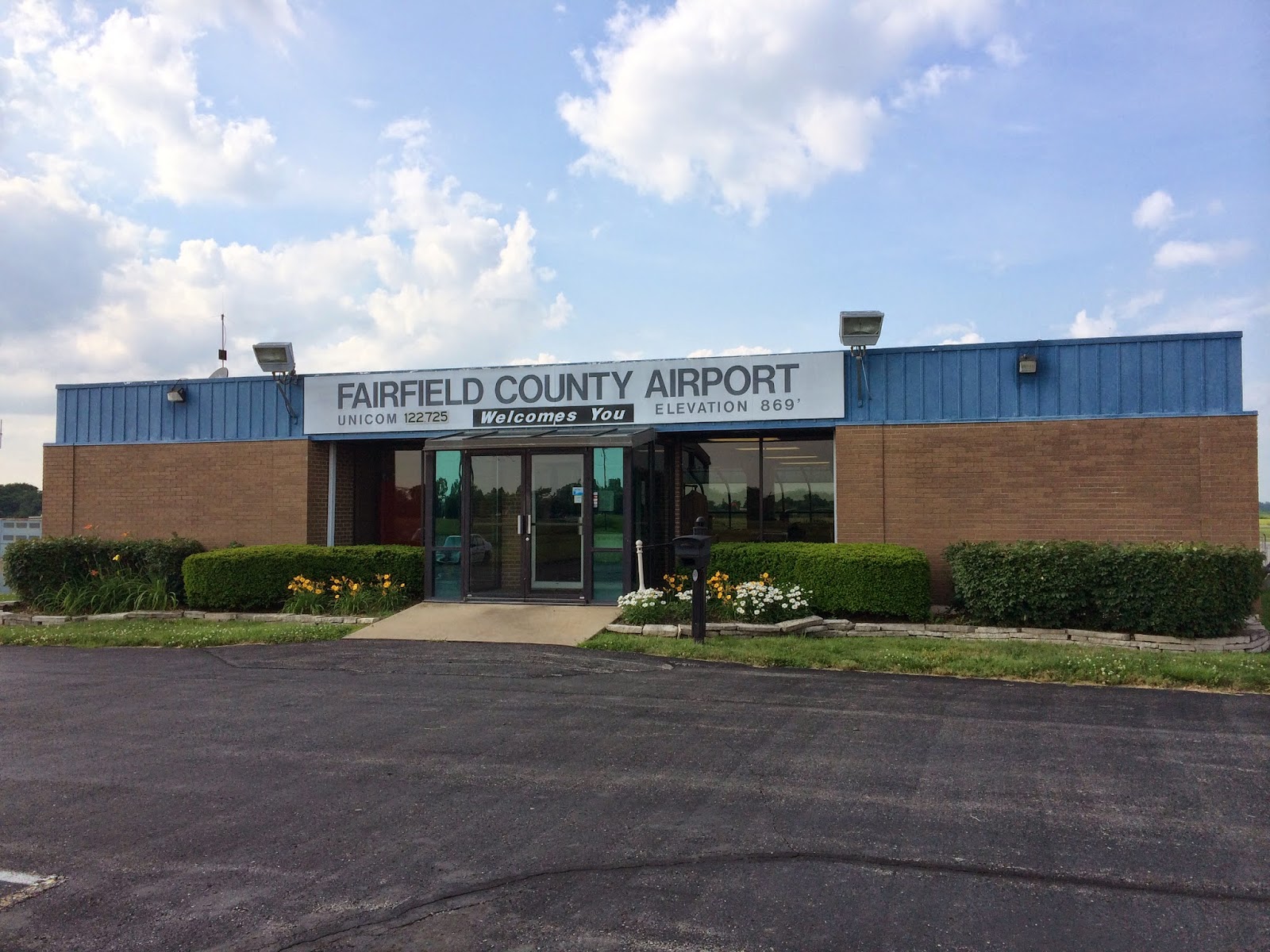 I arrived at Fairfield County Airport shortly before six PM and my instructor, Jim, greeted me. We walked around the plane doing an extensive pre-flight check. I knew that such checks were part of flying but I was still surprised at the level of detail involved -- checking individual nuts, ensuring that various pieces of the plane had appropriate ranges of motion, etc. After about 30-40 minutes of this, it was time to climb into the plane. First, though, Jim pulled it out of the hanger. Literally pulled it. 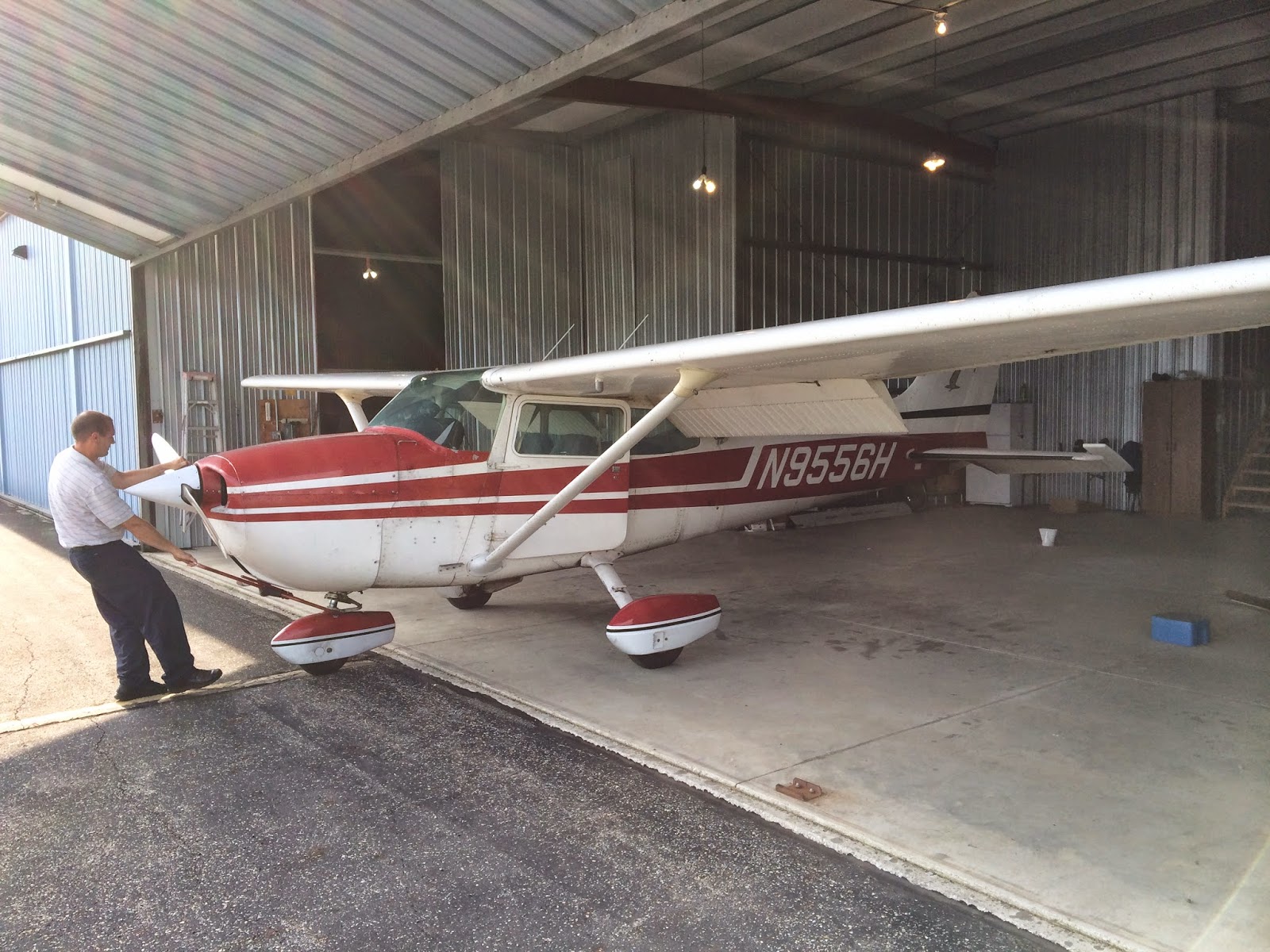 We went through the rest of the pre-flight checklist, put on our headsets, and Jim had me taxi the plane around a bit. This was -- no joke -- the most difficult part of the whole experience for me. Steering the plane on the ground involves using foot pedals in a way that I found rather difficult to get comfortable with. I sort of managed, but needed some assistance from time to time. Then we were lined up with the runway and it was time for me to get the plane in the air.

Yes. Time for me to get the plane in the air. Jim and I had talked about this, so I knew I was going to be doing it, but it still was a bit nerve-wracking to have my very first actually flying-a-plane experience be getting it up off the ground. Keeping my hand on the throttle, watching the airspeed indicator, etc. It felt like a lot to be thinking about. But then before long we were leveling off. My first takeoff was complete!

We spent the next hour flying over the general Fairfield County area. When I say "we", I mostly mean "I" since I did probably 90% of the flying prior to the landing. I did ask Jim to take the controls briefly so I could take a few pictures. Here are two of them, taken from the pilot's seat. 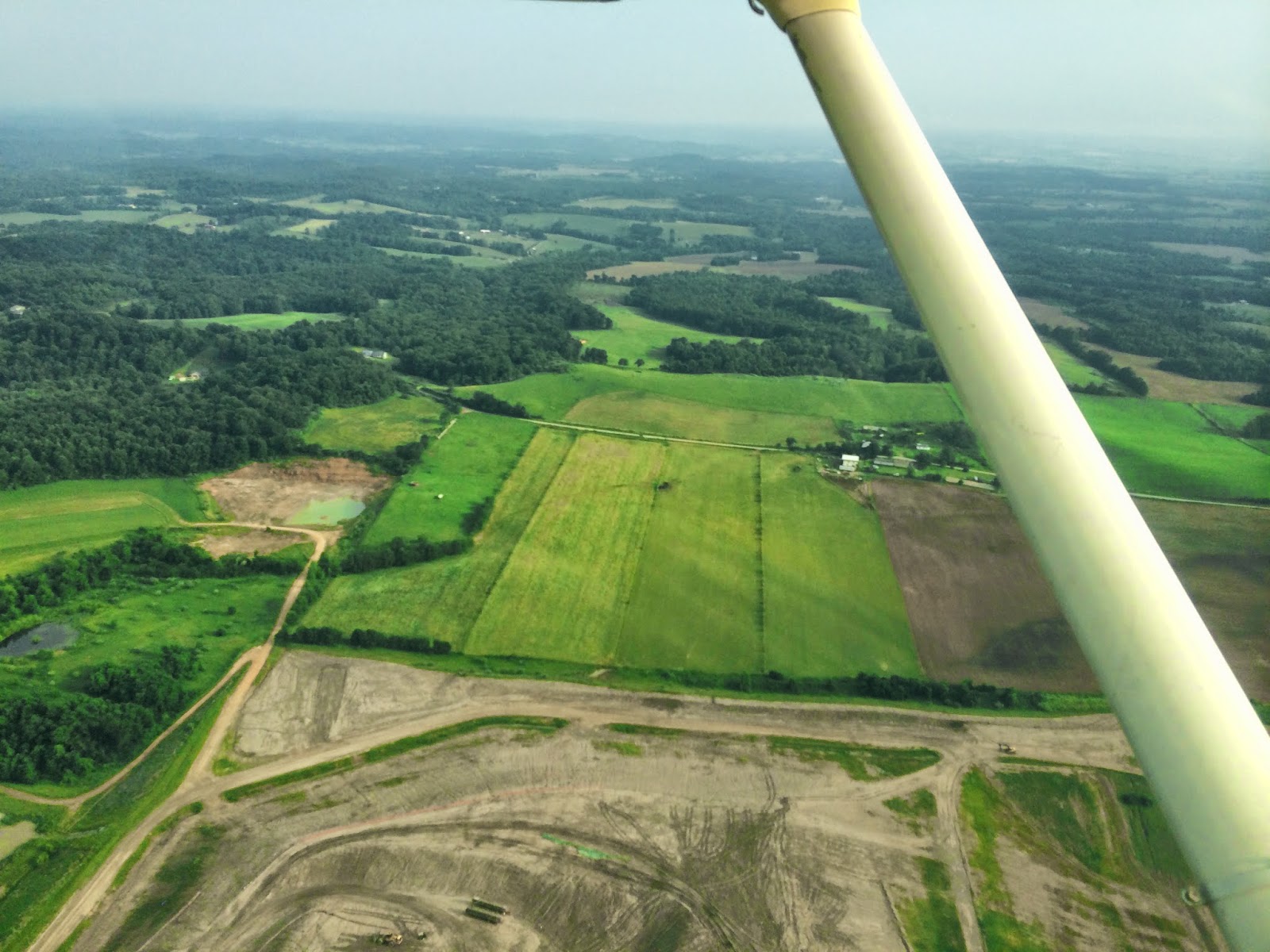 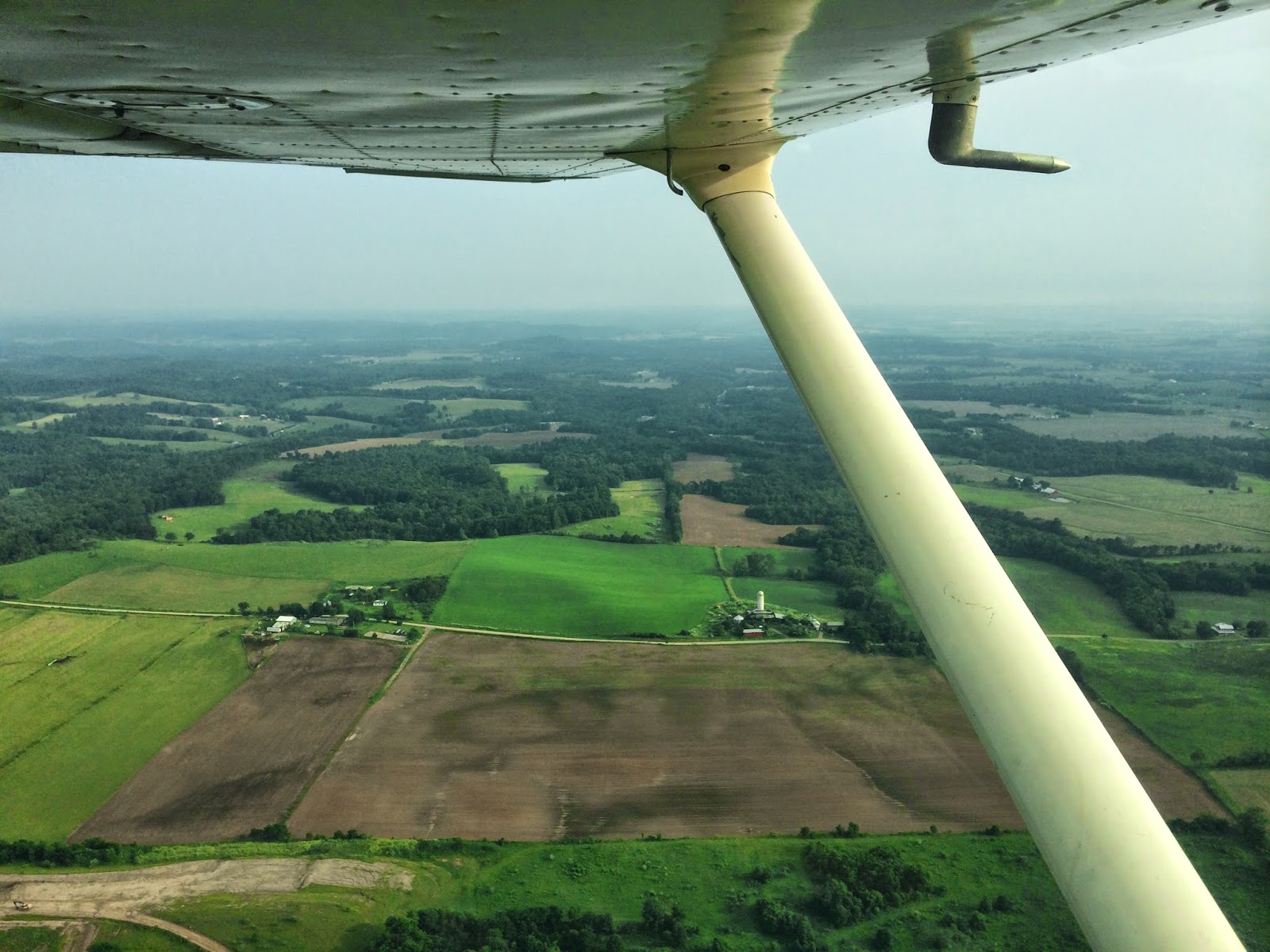 There did end up being some rain around and we were steering away from it off and on. I do wish that I had thought to ask Jim to take the controls briefly at one point because there was a truly impressive view of a rain storm in the sort-of-kind-of-distance through the cockpit window at one point.

Before long, the hour was up and it was time for us to land. Jim offered to give me a role in the landing, but I decided that I would observe rather than participate in it. The landing was very smooth and I helped with taxiing the plane back to the hangar. No sooner had we gone through the post-flight checklist but rain started pouring down. 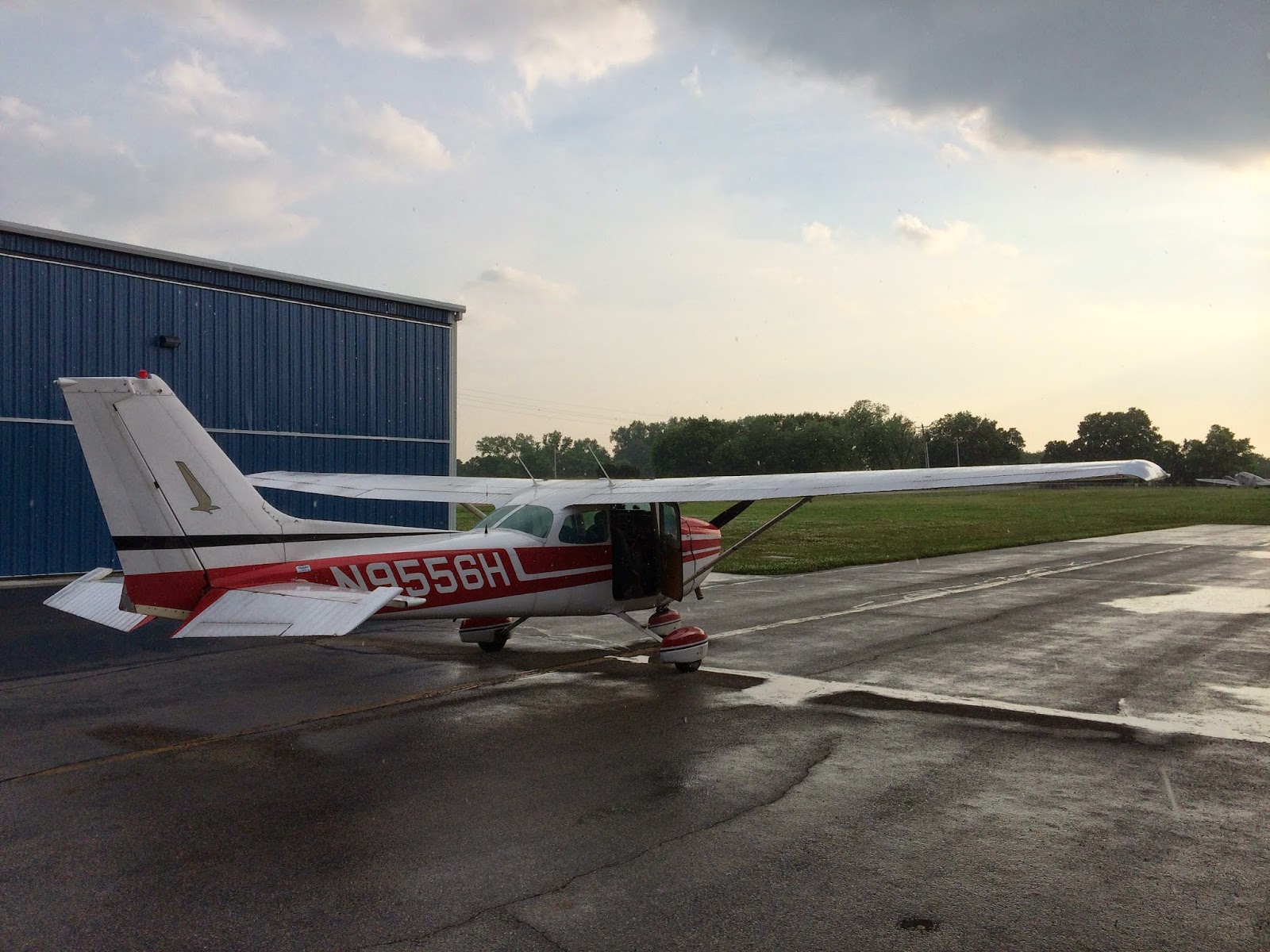 After the flight, Jim and I chatted for a while in the hangar. The process of getting a pilot's license isn't cheap, and realistically I don't see myself putting in the requisite number of hours in the near future. But I did say that I'd like to get up in the air again sometime this summer and, who knows, maybe next time I'll be the one doing the landing!