Those who read French might be interested in the newly-released edition of the long-standing dark fantasy anthology Ténèbres which contains a translation of my story "Twenty-Seven Rules for Coping." Thanks to the fine folks at Goldfish Grimm's Spicy Fiction Sushi for giving the story its initial publication and to Dreampress for selecting it for this year's Ténèbres.

I received my contributor's copy today and was quite pleased to hold this, my first foreign-language translation, in my hands. Even if I can't read my own story! 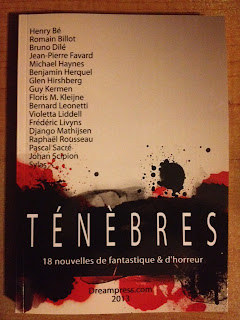 Posted by Michael Haynes at 10:03 PM No comments:

My science fiction short story "An Alien Named Tim" is live now at Nature. This is my second time appearing in Nature. I originally wrote this story for one of Liberty Hall's weekly flash fiction competitions; it's my first sale from the stories I've written there.

If you read "Private Memories" earlier this week and want something a bit lighter, this should fit the bill.
Posted by Michael Haynes at 1:20 PM 3 comments:

May's about 2/3 over now, but that's still vaguely "mid"-month. So, here's a real quick goal check-in.
So, for my relatively-unambitious (for me) goals, I'm doing fairly well.

In the big picture, I'm still WAY behind on my for-the-year goals. My short story reading has slacked off this month and my new-story submission rate has been abysmal. A direct consequence of that latter item is that I have very few upcoming publications at this point. That's partly due to some quick turnarounds on recent sales, but it's also a reflection of the fact that I haven't been as on top of getting new things out as I have in the past and there have been times when I haven't been great about getting older stories back out the door after a rejection.


I've got to admit that I wouldn't have guessed that my actual acceptance rate was higher, even fractionally, during that time frame in 2012. But you can see where the big difference is. We're 141 days into this year (and we were 142 days into last year, now that I think of it...) and I've averaged basically half a response per day. Last year I was averaging over a response per day. (In fact, I'd averaged over a REJECTION per day...)

I'm not sure I'll ever get back to early-2012's pace. There was a point there where I had over 40 short stories circulating and I've been in the mid-20s most of the last six to nine months. Which is still quite a few!

And I'm not sure there's any huge point to any of this musing, other than for my own benefit. But if you find it useful or inspirational or interesting, that's cool, too.
Posted by Michael Haynes at 7:49 PM No comments:

Email ThisBlogThis!Share to TwitterShare to FacebookShare to Pinterest
Labels: Goals

Just a quick note to let folks know that if you get Daily Science Fiction's email stories, today's is my short story "Private Memories."

If you do not get the emailed stories, then you can still read my story a week from today when it goes live on the Daily Science Fiction website.

Also, as a heads-up, I'll have a (very, very different from "Private Memories") story in Nature this week: "An Alien Named Tim."
Posted by Michael Haynes at 10:46 AM 2 comments:

"Three Times a Killer" Available Free at Plan B Magazine

My crime story "Three Times a Killer" is live at Plan B Magazine and available to be read for free. This story features the same main character, South African criminal Lawrence Thomas, as my Amazon/Kindle eBook short story "Levels of Trust."

Here's a little preview of the story which is up at Plan B:


I was sitting at a bar, drinking another Black Label, when the man came up to me. I should have known he was bad news, a fellow like that with his nice suit, in a low-rent bar like the one I was in that day. Maybe it was the beer, maybe it was that I was still basically a kid, only twenty years old, but I didn’t twig to it.

“I hear you’re looking for work, Lawrence,” he said, lowering himself gently onto the stool next to mine.

I took another swallow, cool-like, before answering. “If the pay’s right, sure.”

The suit nodded and pulled an envelope from his pocket. “I’ve got a problem, see. Girl trouble.”

He grinned at me like we understood each other. I would have just as soon punched that smarmy grin off his face, but I needed money and there wasn’t no use biting the hand. I grinned back at him.

And, for the heck of it, a little preview of "Levels of Trust." 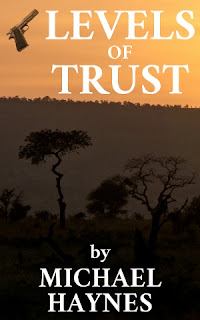 "There's some stuff you should know before you go in there," Ian said, meeting me at the nondescript front door of the complex. I came inside, leaving the heat, stench and noise of the slum streets behind. My eyes were slow to adjust from the noontime sun to the comparative dark indoors.

Ian had arranged things so he'd be the one letting me into the complex. I was on unfriendly ground, and any intelligence I could get would raise my odds of success.

"One, no weapons. If you're packing, turn it over to the guy at the door. They'll still pat you down, but this is gonna go a lot easier for you if they don't find anything when they do. Get me?" I nodded.

"Two." He pressed a button and waited briefly until he heard the click of a latch opening. We passed through a door. "Inside, the man you meet will appear to be in charge. But he won't be the person deciding what happens next."

"You shouldn't be telling me what you've told me already, should you?"

"Just remember, everyone's got to answer to someone. Three, and this is most important, whatever answer you're given will be final. There's no appeal, no debate." He stopped me, put a hand on my arm. "You hear me?"

Me and Ian, we go back. Having bumped into him a few months ago, not long after I arrived in Johannesburg, had seemed like just a happy accident. With recent developments, that chance encounter might be a lifesaver. I'd saved Ian's ass a couple of times years back, now I was cashing in all that goodwill. So I didn't deck him for grabbing me.

But I still yanked my arm away hard.

So, "Michael Haynes - A Writing Blog" seemed to be becoming progressively more inaccurate of a name as I talk much less about the actual mechanics of writing than I did when I started out on this road a little under two years ago.

So, I've changed the title to "Michael Haynes - Science Fiction & Fantasy Writer." A bit more descriptive of what I've really been posting about in recent months. And also indicative of the fact that I don't think I'm apt to go back to writing a lot "about writing" in the future. At the same time, I think I may do some more personal postings here alongside my usual goals and announcements posts.

Speaking of goals, it hasn't escaped me that I haven't set any for May. This is going to be kind of a crazy month, so I'm going to keep my goals really basic.
And that's it for this month!
Posted by Michael Haynes at 11:36 PM 2 comments: