I'd never seen the movie "Citizen Kane" before this month. 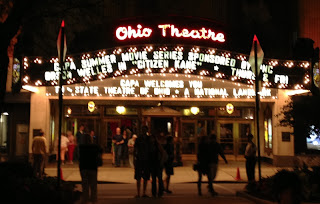 Somehow the idea had gotten into my head that the first time I saw Kane should be not on video but in a theater. And somehow I stuck to that idea from whenever it first came to me, probably in college, up to the present. I think I'd had a few chances to see Kane on a big screen which hadn't worked out in the intervening years. Finally, I set aside time to go see it at the Ohio Theatre as part of CAPA's Summer Movie Series. Not even car trouble kept me from finally getting to go see Orson Welles' famous movie. 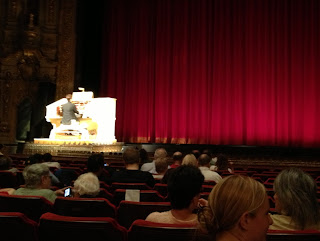 Before the movie, at intermission, and after the movie there was live organ music. The Ohio Theatre's organ is bright white (bright enough to make taking a photo of it with my phone difficult) and it raises and lowers into the orchestra pit. I remember, as a child, finding that fascinating and disturbing. (Even the phrase "orchestra pit" suggested something that was more suited for Indiana Jones than musicians to my young mind.)

Read more »
Posted by Michael Haynes at 1:31 AM No comments:

The 2013 Million Writers Award nomination period has opened. This award is for stories over 1000 words in length which had their first-ever publication in an online venue with an editorial process during the year 2012. (Full rules are here.)

Editors of online publications can nominate three stories. Everyone else can nominate a single story. The nomination form is here.

Here are my stories from 2012 which are eligible for the award. I'd certainly be thrilled if you were to see fit to use your nomination for one of these stories:

Email ThisBlogThis!Share to TwitterShare to FacebookShare to Pinterest
Labels: Awards

Being Unintentionally Offensive is Bad Writing

Carrie Cuinn put up a blog post today reviewing the last three months' of flash fictions from Nature Magazine's Futures feature. My story "An Alien Named Tim" was one of the stories reviewed. Carrie gave it a rating of 3 out of 5, saying it was "funny" and that she "Would have rated it higher except for the space hookers."


[Edited 7/9/13 to add] Carrie wrote to me on twitter saying: "By quoting only part of that sentence, you put the focus on 'women' instead of 'aliens', when it was the alien part I objected to. Either you didn't understand what I was saying, or misrepresented it--but the issues wasn't women, or even hookers in space. It was the specific trope of 'alien space hookers'/the racism of classic examples; your 'look I've learned' statement ignores that." I had not intended to misrepresent and apologize for doing so. The full sentence from the review was:


"Would have rated it higher except for the space hookers; suggesting one catches diseases from sex with alien women is based on the classic SF method of hiding racism by attaching negative stereotypes to 'aliens' instead."

The reference in question came near the beginning of the story in what was essentially a throwaway joke as the reference isn't in any way relevant to the rest of the action.


"We weren't armed; the trade routes had been peaceful for decades. The biggest risk to cargo haulers was catching something from one of the alien women at the waystations. A raygun wasn't much good against that sort of trouble."

I'm a bit embarrassed to say that my initial reaction was "But I didn't saaaaaaay they were hookers!" Which, if I'd been foolish enough to actually say that should've earned me a "not impressed" look and a "Really?" 'Cause... Yeah... That was pretty clearly the inference I was going for there. Fortunately, I didn't stop at that first reaction, and I also didn't linger around "But I didn't mean for it to be offensive" either.